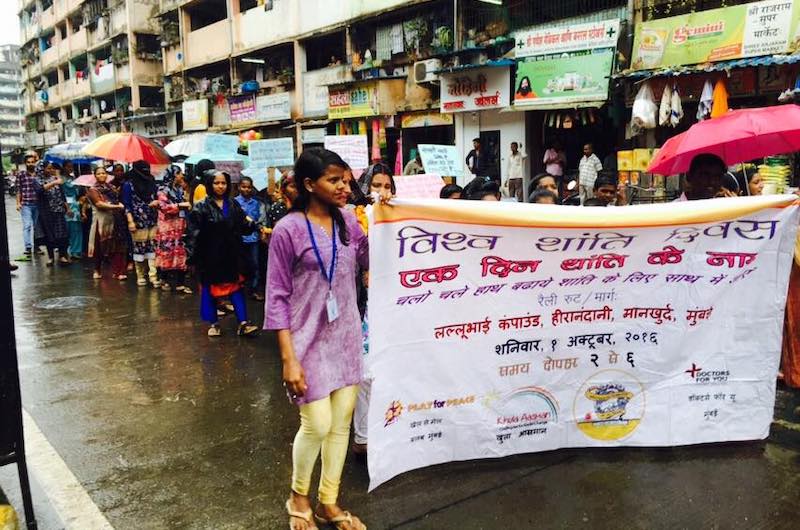 Hand in hand, the participants from many communities, some from Hindu, some from Muslim, walked together.

On October 1, the Play for Peace Club Khula Aasman in Mumbai partnered with Doctors For You to participate in a Walk for Peace to celebrate World Peace Day. 107 inspiring young people joined the walk and marched from Lallubhai Compound Mankhurd to Market Ground, Lallubhai Mankhurd, Mumbai. The group, including 9 women from RafiqNagar-Khula Aasman Community Club, 3 Khula Aasman interns (TISS), 3 volunteers from the Academy of Theatre Arts at the University of Mumbai, and 5 PFP youth leaders from the Lallubhai community, conducted a Play Session with the children, as well.

The participants gathered with banners and placards proclaiming their dreams of a world where young people can realize their full potential, a world without war and violence, emphasizing that peace is a family value. Hand in hand, the participants from many communities, some from Hindu, some from Muslim, walked together. They carried a Peace Flag made by young Hindu and Muslim children together with visions of peace and solidarity in their homes, communities, country, and world. The young people joined together in a big circle to play together for a one hour session led by PFP Trainers Archana Magar, Snehal Gaikwad and Shabana Khan. Later the circle became larger as people who were watching from their balconies or on the streets joined. After the play session group of volunteers from Connect organization facilitated a Drum Circle session for the children. After the session, the facilitators and volunteers helped the children assemble for a group photograph and distributed snacks and gifts at the DFY office building. The day was filled with hope, peace, and compassion, and the participants and the facilitators were able to learn more about their own communities and the communities of others.