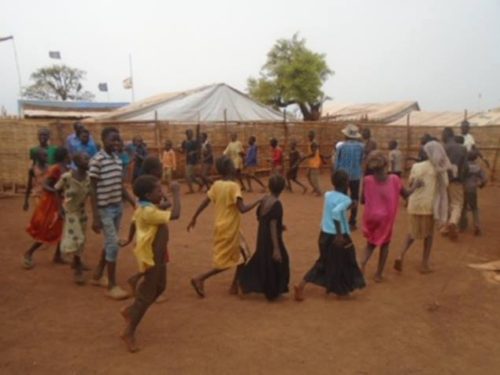 Play for Peace South Sudan saw one of its own trainers, Eric Gisairo, take the initiative to cycle to and from the office during Earth Week. While getting some awesome exercise, Eric also discovered the importance of concentration making sure to keep his eyes and on the road and pay attention! Not only that, but Eric benefitted the environment minimizing fuel usage. 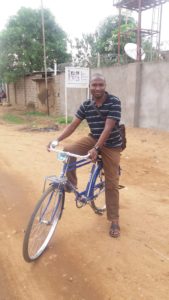 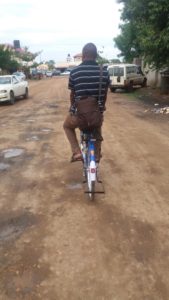 In Wau of South Sudan, one hundred kids came for an Earth Week Play for Peace session. The kids were split into four groups. The children presented their talents in front of each other. Each group came up with traditional songs, and it was discovered that each group sang about the importance of water. The children articulated the importance of water in their life as it’s used for drinking, bathing, washing, and farming. Water, so important for humans, is also important for the Earth. The kids learned that plants, like food crops such as maize, simsim and sorghum, need water. The children also used newspaper to make several collages. It was a fantastic experience for all involved! The kids loved expressing their feelings and ideas through song, and the collages were a wonderful creative experience for the kids that promoting respect for the resources available. As they were all split into groups to complete the activities, the kids fostered cooperation and understanding among each through group work. The activities were fun and relaxing, and the kids felt a sense of team spirit and actively participated. [gallery ids="9048,9049,9045,9047,9046,9050"]