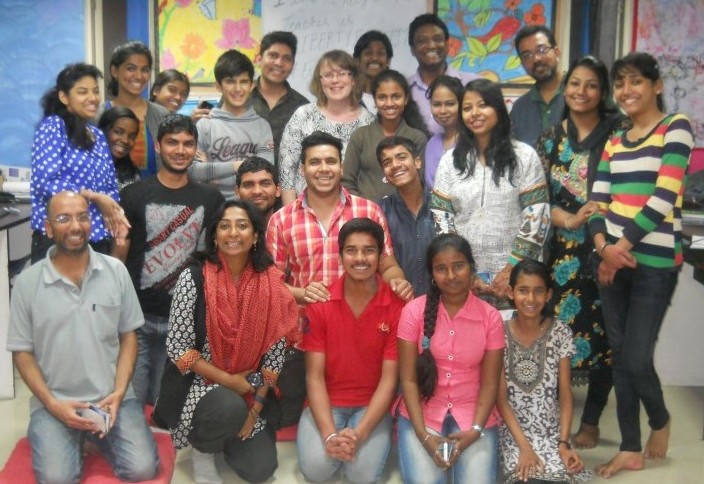 "Today I know we were learning about values but I saw more than that, I saw humanity."

The first day of my month-long journey to visit the Play for Peace community in India was Holi, a Hindu celebration where colored powder is smeared on faces and clothes, there is dancing in the streets and water balloons fights break out among kids. My second day was another type of celebration, it was a celebration of life and friendships crossing divides. We were with children and teenagers from a ghetto in Delhi who warmly welcomed myself, Ajat, Swati, Agyat and Abha into their Play for Peace Club that meets every Tuesday from 4-6 pm. We slipped off our shoes before entering and more than 20 of us squeezed into a 15 x 20 room with brightly colored posters and paintings lining the walls. The air was heavy with pre-thunderstorm humidity but laughter and smiles brightened the gloom. The Play for Peace chant brought our group together, the only activity led in English for the rest of the session. My self-appointed translator was 12 year old Aaron*, a refugee from Afghanistan who shared his story. His father, a policeman, was killed by terrorists, leaving him and his mom alone to flee their home and to lose everything, eventually finding their way to a temporary shelter in Delhi. This Youth Center where Play for Peace met was the only place where he could be a child. Also, from shelters were Reshma and Shilpa. Reshma is a Muslim girl who ran away from home because her parent were forcing her to marry at 13 years old.  Shilpa is Hindu, but from "the lowest caste" and her mom begs on the street to help them survive. Shilpa says she doesn't feel safe outside the Center and her dream now is to open a school to help girls who can't go to school. I was moved to see their strength and how strongly they held the spirit of Play for Peace in their hearts. In our reflection about the Practice Peace Session they all said they were able to let go of their stress and worries, at least some of the time, to fully engage in the joy of play. They also all deepened their friendships and made new friends even across cultural and religious divisions that they face in their daily life. Here is what the children had to say about this Practice Peace Session;

Despite the different ages and people coming from so far away, we all played together. For sometime I felt we were growing apart (at the center) but today I saw unity and it felt really good. No one was getting out and that's what I like. No one was put down or made to feel "less than" the other.

This day would not have been possible without the support of the Center for Social Equity and Inclusion (CSEI), and Rahul and Vijay who mentor and support this Play for Peace Club.   *For the safety of the children names have been changed.