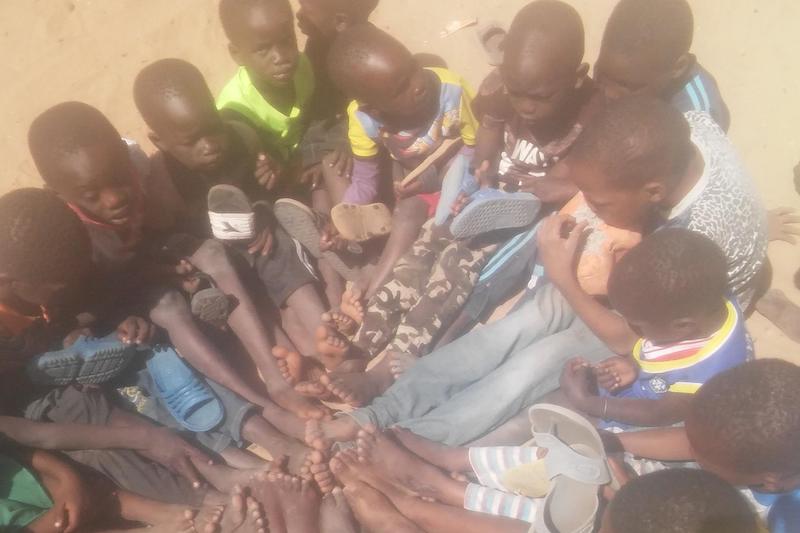 If the future of our world belongs to the young, Play for Peace Senegal ensures that this future is bright by empowering them to learn and grow in an enriching environment. As part of World Interfaith Harmony Week, PFP Senegal worked to teach young people the fundamentals of peace, cooperation, and tolerance. Together with Yaakar and Street Citizen, they launched the event at their social center in Thiaroye, Dakar.

At its onset, this event saw the introduction of a new group of participants: secondary-school girls from CEM Ndiawar Diagne. They decided to set up their own club dedicated to promoting peace and mutual understanding in their community. By working together through various PFP challenges and trust-building exercises, the girls gained a newfound appreciation for their differences. As they discovered new things about their classmates, they learned to approach each relationship with humility. Later that evening, PFP facilitators welcomed a group of local boys to the Thiaroye social center.

The theme of their session was sportsmanship. The children played games that gave them a sense of how to win gracefully, and accept losses in turn. The goal was to appreciate fellowship; to have fun regardless of the game’s outcome because when we are able to share laughter and joy with each other, everyone wins. A little distance away, in the streets of the Biafra district, children ranging from 3 to 6 years old participated in games aimed at raising awareness about water, sanitation, and hygiene (WASH) practices. The lesson of the day was focused on hand washing: each year, millions of children around the world are affected by water- and sanitation- related diseases. Pneumonia and diarrheal diseases alone are responsible for the deaths of more than 1.8 million children per year. But, according to the Center for Disease Control and Prevention, handwashing with soap is an effective and economical way to prevent such diseases.

PFP Senegal believes that children are most receptive to learning when they are having fun, which is why this educational awareness campaign encourages them to play, laugh, and dream, all while learning about personal hygiene. The club also touched on another human rights issue garnering interfaith attention: female genital mutilation (FGM). Although a ban was enacted in 1999, the problematic procedure is still prevalent in Senegal. Contrary to popular belief, it has very little to do with religion, but rather is contingent on ethnic and regional traditions. At present, at least 25% of Senegalese women are circumcised, with prevalence increasing significantly in the southern and eastern regions.

The end of World Interfaith Harmony Week coincided with the International Day of Zero Tolerance for Female Genital Mutilation. To commemorate this awareness day, the Youth Network on Population and Development (Resopopdev), an organization that addresses the health and socio-economic concerns of Senegalese youth, organized a peaceful protest in Dakar. The PFP children showed their support for the young women of Resopopdev by joining in the march. They could be seen brandishing signs and shirts that read:

After this powerful show of solidarity, PFP Senegal closed out an eventful Interfaith Harmony Week by building a Global Fire of Thanksgiving and Compassion. This symbolic fire took the form of a candle; the children passed it around and each in turn shared their ‘inner voice.’ Responses ranged from resolutions to exhibit more self-discipline, to aspirations for improving global welfare and eradicating intolerance. As the fire burned bright, so too did their hopes and dreams for the future.