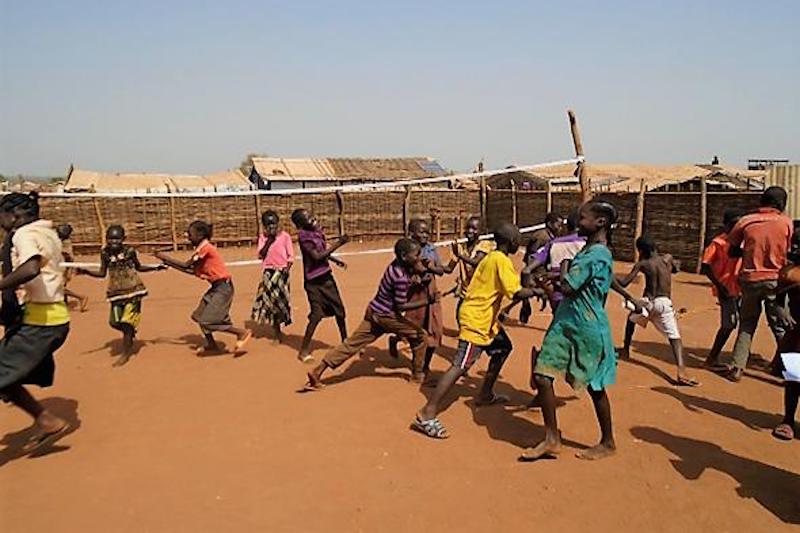 "Play for Peace has changed my life," Eric said. "The idea that we can use games to bring people together seemed impossible before."

In South Sudan, 20 children participated in a Play for Peace Global Games session that explored the themes of peace and identity. One of the activities, “War and Peace,” sent the children running freely when “peace” was said, and sent them running back to pre-formed circles with the names of different countries when “war” was said. Though just a game, this activity really resonated with the children. The kids are internally displaced and have been living in a refugee camp since 2016. When they were displaced, their properties were either looted or destroyed. Some have relatives who have been killed. The activity demonstrated the impact of peace to the kids who recognized the freedom that peace allows. Just as in the game, peace lets one move anywhere and war forces one to find refuge in any country. The kids also grasped how when there is war and one is forced to find refuge they will meet different people with different cultures along the way. Tolerance towards others was then strengthened through the exercise.

Eric Gisario, PFP South Sudan's certified trainer, explained that South Sudan, currently in a state of civil war, sees many of its communities being affected by war, resulting in a divided country. This lack of freedom of movement is born out of fear and mistrust which has led to tribalism. For example, after the 2013 crisis between South Sudan’s two largest ethnic groups, the Dinka and Nuer, a member from one group would not be welcome to move or travel to an area inhabited by the other. Eric is no stranger to this sense of unwelcoming that is prevalent within the communities of South Sudan. As a native of Kenya, there are certain areas that he says he can reach but others he cannot due to differences in ideology.

"Play for Peace has changed my life," Eric said. "The idea that we can use games to bring people together seemed impossible before." Eric finds joy in gathering children and playing games. In schools, in communities, and with the protection of civilians where the internally displaced are staying, Eric has used Play for Peace to spread joy giving many the ability to forget what they have gone through during the war and embrace reconciliation. He hopes to help those who are displaced forgive and begin the journey of creating harmony and peace between these communities.