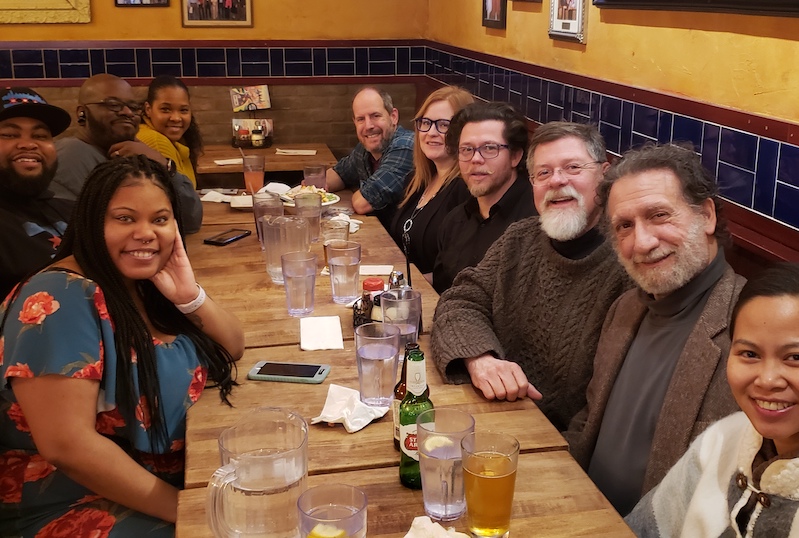 Chicago Reunion Rekindles Friendships and Excitement for Play for Peace

Play for Peace not only unites communities affected by conflict, but it also brings together its own community members, creating a family of peace builders trying to change the world. The Play for Peace connection is strong—so strong that it recently brought together a group of Play for Peace members—and many former members—in Chicago, who are devoted to using cooperative play to bring peace to children in their local communities.

Earlier this month, 12 Play for Peace members and former members met at Lou Malnati’s Pizzeria in downtown Chicago for an afternoon of delicious pizza, reminiscing, and conversation about how Play for Peace has changed their lives. The reunion was organized by SallieAnne, a former youth facilitator, who joined the organization in 2014 when she was only 14 years old. She was joined by current and former mentors, trainers, and facilitators from the Chicago area, as well as board member John Guarrine.

The group chatted about their favorite Play for Peace memories and how the organization has helped them and others to see things from a new perspective. For SallieAnne, her favorite memory was when she spoke on a national TV network about how Play for Peace has changed many lives, allowing her and others to see that people who are different are not a threat. This has allowed people in her community to create friendships and work together with people they may not have otherwise.

The group also talked about how they would all like to work with the organization again. They agreed that creating Play for Peace programs in their local schools would be a wonderful place to start. The group is set to have another reunion this Saturday, February 29, when they will continue to catch up and discuss their plans for bringing Play for Peace to their communities in Chicago. Stay tuned!