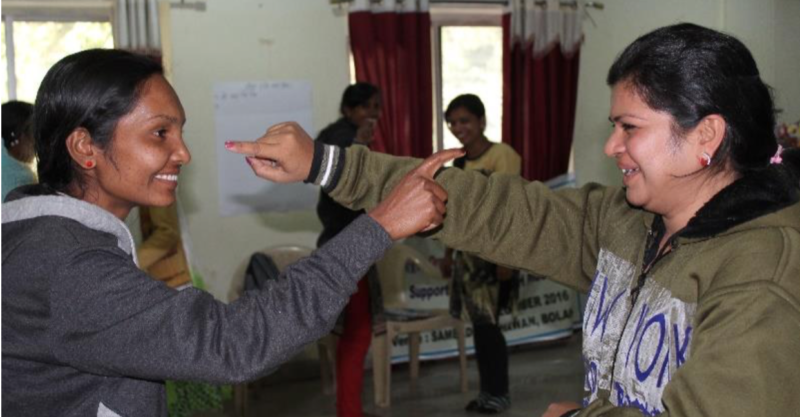 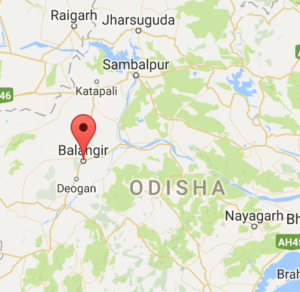 Bolangir, Odisha[/caption] Youth Service Centre, a NGO, located in Bolangir, works to protect interests of children in some of the poorest areas in Odisha, known as the "hunger belt" of India. Odisha, is a state where families migrate out for several months at a time with their children. Sadly, these children are sometimes abused and tortured while they work for six to eight hours daily with no basic amenities. There is no school for these children during this time of work, and once they return to Odisha, many stop going to school altogether. The children who don't migrate with their parents, are left to be looked after by their grandparents, relatives or neighbors. These children do sometimes continue school but with very little support. The Youth Service Centre supports and helps protect the rights of these children by hosting children's clubs in 20 villages. Each club has 20-30 children attending (ages 6-12yrs & 12-17yrs) The club's objectives include: This workshop acted as follow-up to one in September and was attended by 18 members of the Youth Service Centre including the founder, Umesh Purohit. The workshop was conducted in Hindi, and Odia to ensure that the attendees gained a deep understanding. The aim was to enhance their understanding of Play for Peace core values, EE concepts, as well as to help them learn how to enable Advocacy through the use of Puppetry. The Play for Peace facilitators that made this workshop happen were: Swati Bhatt, Agyat Bhatt & Nikhil Mehta. The first day of the workshop was spent understanding which games the attendees found challenging in the field over the last 2-3 months. The Practice Peace session was carried out, starting with the Play for Peace ritual, including a  mix of games. [caption id="attachment_8178" align="alignleft" width="300"] 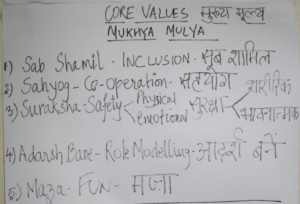 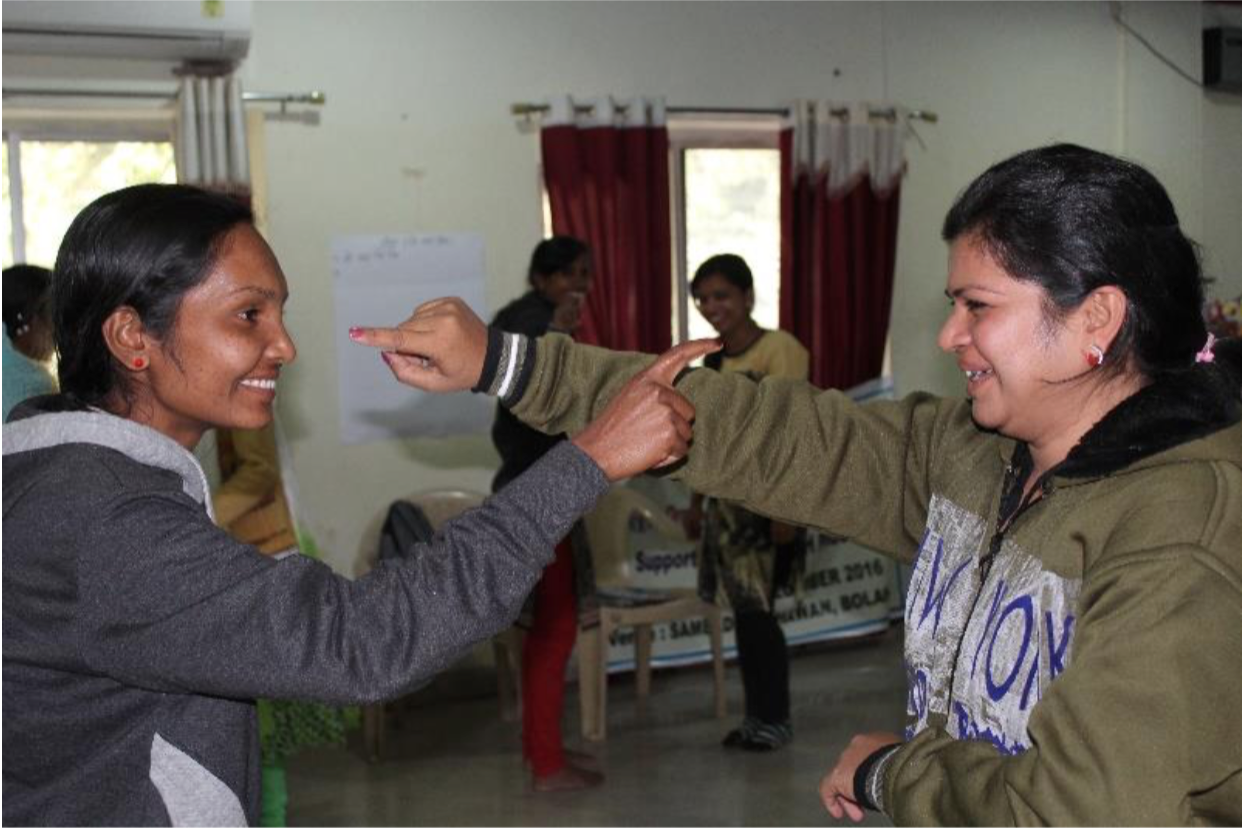 The attendees taking part in the Games at the workshop[/caption] The next session, following lunch, was all about deepening their understanding of child-rights.  The 1989 UN Convention on Child rights was discussed. The "As you like it" activity was introduced to highlight the related issues and then discussed.

The World Cafe activity was then carried out. Divided into groups, they were asked to discuss, what is required for a child's overall well-being at home, in school, in the community, in places out of the community.  The aim was for the attendees, themselves, highlight the four basic child rights. 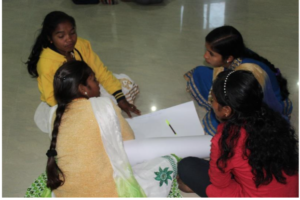 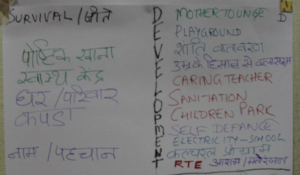 The attendees then played the "Phal, Phool, Sabji" game (Fruit, Flowers and Vegetables). 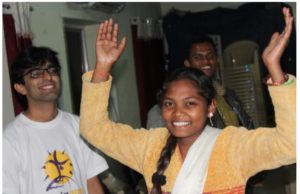 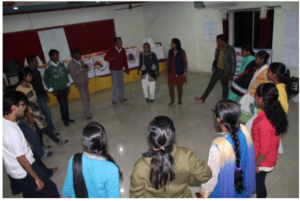 At this point, it was time to enter the world of stories and imagination. The group were divided into smaller circles and given picture cards. The stories were built up of those picture cards by the groups, and in their own language so they could really express themselves.
Each smaller group was assigned one of the four basic child-rights. They were then invited to have a discussion in their own smaller circles, on experiences related to that particular child right from their own lives, and weave a story around that. 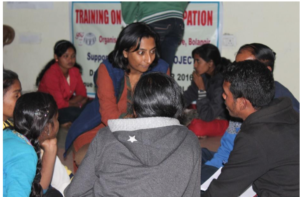 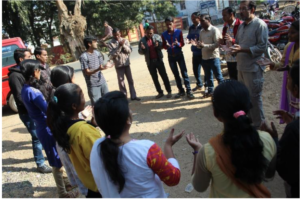 Once inside the venue, the groups continued progressing their stories. Now, it was time to introduce them to the world of puppetry.  Each person was given an object, and they were told, that the object could be anything they imagined,  have its own voice, characteristics and personality. This was done to help them understand that each character in a story/script had its own voice, movement, character and personality of their own. Next came the puppets. They were introduced to glove puppets and stick/junk puppets. And they were asked to start making puppets. 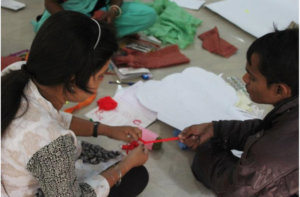 The groups were then shown how to use the puppets. They were taught how to hold the puppets, and the 'grammar' and how two puppets interact. 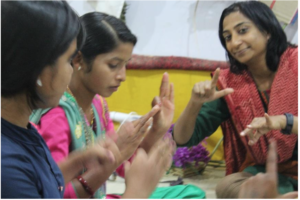 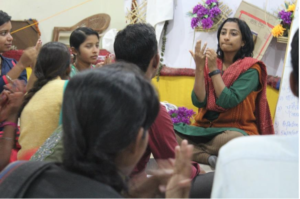 There was then practice using the puppets, and a mock puppet show. It was nearly the end of the day, and the groups were given feedback, and knew what they had to work on for the next day's session. After the feedback, the day ended with the Play for Peace ritual. 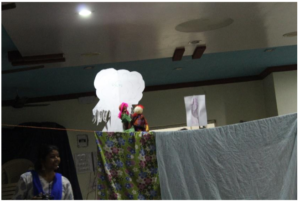 The final day of the workshop, the attendees had acted on the feedback from the previous day and, after another practice session, were ready for the puppet show. Below are photos of the puppet shows. 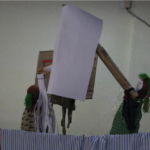 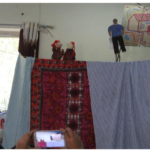 Mr. Umesh, then gave some feedback, that there had been a definite improvement as compared to the previous day, and that, with practice, the participants could improve on the range of movements they could do with the puppets.
There was then a discussion on how puppetry could be used in their work in the villages.  They were told, that puppetry can even be creatively used for counselling on a one-on-one basis with a child facing some issues, particularly because most of these participants worked closely with the children in their villages. After the workshop, there was going to be a meet for organic farmers at the same venue. Mr. Umesh agreed that the participants could carry out a puppet show for the organic farmers.  The groups were really excited by this and started to work as one large team to prepare for it.  Although they were excited, some of them were nervous and said only the people good at the puppetry should show the next day. They were then told that  this was a good opportunity for them to practice the core value of ‘inclusivity’. To encourage, them the next few hours were spent playing some of the games that they had documented earlier. 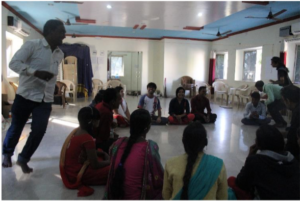 After lunch, the group had another Practice Peace session, were reminded of the games they had learned through the workshop, and were encouraged to facilitate by themselves. The next important step was to introduce the Action Plan for the group.
We also re-iterated the importance of writing reports after every Practice Peace & Puppetry session that they would do in their villages. Writing report as a self-reflection tool, and keeping record of learnings from every session. Since they had been facing some issues in writing reports in the format shared with them during the previous session, we simplified it further for them this time. 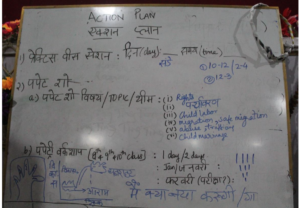 There was then a conversation to summarise all the learnings so far from both the workshops. We did so by diving the learnings into ‘knowledge’ (what happens in the facilitator’s mind) and the corresponding tools that they can use. We had some detailed discussions wherever there were gaps in understanding. We re-iterated the significance of core values when one is practicing Play for Peace.
A few other playful tricks and techniques introduced the last time to deal with various situations when working with children and communities (including the five finger contract), were also revised.

There was more practice for the following day's puppet show, and then the workshop was then ended by the Play for Peace ritual. 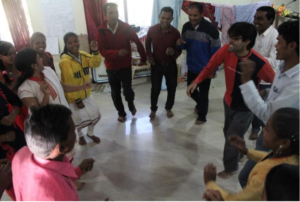 Some of the thoughts of the participants are below: